for a mini-retrospective of Oakland artist Ezra Li Eismont.

Join us for a mini-retrospective of Oakland artist Ezra Li Eismont.

His work is a mix of pop related parodies and graffiti inspired techniques. Not to be mired in one focus of content he has ventured from sacred math influenced work reminicent of eastern style patterns all the way to zombie pop culture parodies. Mindful and soulful in his application of paint Eismont embraces his past and makes work that resonates with a wide audience.

Ezra Li moved to the SF, bay area in 1990. He studied at The California College of Arts and Crafts from 1992 until 1996, when he earned his B.F.A. in Painting. He worked under Raymond Saunders, Jack Mendenhall, Mary Snowden, Vincent Perez and Ken Rignall.

Ezra was a featured artist in the 1997 book “GRAFFITO” about the bay area graffiti scene in the mid 90’s. Ezra has shown his work extensively throughout the Bay Area in such galleries and museums as I I I Minna Street, the Yerba Buena Center for the Arts, the Upper Playground, Balazo Mission Badlands Gallery, Richmond art center, Inferno Gallery,Gallery A.D. in San Jose, I.C.U. Art in Los Angeles and numerous alternative gallery spaces. Examples of his work have appeared on flyers and album covers for local parties and groups such as Balanceman, the Bay Area Art Collective and Cat Five. He is staff artist for Thermal Recordings, Nutmeats Recordings, and Oaklyn records – three Oakland based record companies. He has also published work in ANARCHY magazine, WIRED magazine, The Stranger, GQ Spain, PRINT Magazine,and GRAFFITO. Eismont’s work resides in hundreds of private collections across the globe.

Ezra is a member of the San Francisco based Gestalt Collective, a group of collaborative muralists. Together they produced a site specific mural for the Y.B.C.A.’s “Bay area now” show in 2005. For the last 8 years he has been working as a scenic and billboard painter, applying his trade anonymously. He has worked with many other artists, including Doze Green, Jon 156, Dave Choe, Rhode Montijo, Christopher Reuss, Sol Lewitt, Bunnie Reiss, Garrison Buxton, Nome Edonna, Apex, Crayone and many more.

Three hour clinic run by artist Barbosa Prince. It is an opportunity to work in a group environment and receive aesthetic feedback as well as formal direction regarding techniques and materials.  This is a low pressure environment and is a great way to grow as an artist and get inspiration outside of your personal studio. Bring your current painting, drawing and necessary tools and paints. Great way to build your portfolio. 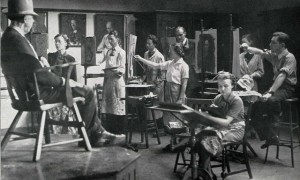 We provide large easels and a table surface for your paints. Just bring your painting and paints. This clinic is best for intermediate to advanced students, however all are welcome. Class size is limited to 8 – email for more information or call the gallery 510-798-7637 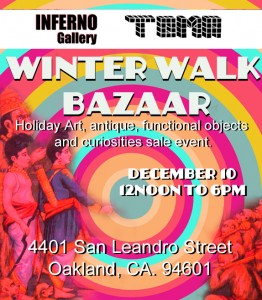 INFERNO and TOMA Galleries will have our doors open for our Winter Walk Bazaar!

Forget the typical consumer fare that has no soul and ends up on the garbage heap. Give a unique gift this year!

Also Roll-Up and Rebel Bikes 510 will be holding a charity give-away for local Oakland kids!