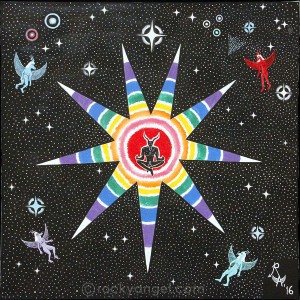 Our Satellite Gallery  in Alameda, CA is  having a show on 2nd Fridays

From Urban Legends to the mysteries of the universe- Rocky Angel opens the gift of insight with his revealing paintings. Outer space, aliens, nudism, psychic revelations, Satanic insight, scientific anamolies, and government conspiracies unwrapped! Don’t miss it! Mark your calendar! Write it on your hand or have it tattooed on your face.

Also get a glimpse of some of my latest work for an upcoming show of Barbosa Prince art at AUTOBODY FINE ART on August 3rd, 2019.

Always happy to be helping out young artists in the bay area especially in my neighborhood. INFERNO gallery has held tours for local high school students as well as participated in class projects to help kids learn that Art is a career possibility. This year a latino student is going to interview gallery director/artists Barbosa Prince, use his work, and career path to show students in East Oakland that they could have a career in Art.

East Oakland is filled with talented kids that can use the support of local businesses. If you have a thriving business in East Oakland, think about offering up interviews and tours to help kids see that their neighborhood is filled with potential – it’s not all gangs and side shows. Also making an effort to connect with your neighborhood population is crucial to real community building. Here’s a shout out to the teachers at Aspire Golden State College Preparatory Academy who challenge their students and help them see the future. 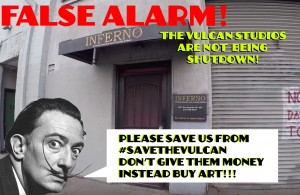 VULCAN STUDIOS AND THE INFERNO IS NOT BEING SHUTDOWN.

YIKES! Vulcan Tenants Union has been using our name without permission to raise money for lawyers.

We are really sad that a small portion of the residents of the Vulcan Studios have taken it upon themselves to use our name to push an agenda to defame and slam the owners of the Vulcan as bad landlords. They also position themselves as the voice of the artists of the Vulcan – which is a complete exaggeration. The owners of the Vulcan are awesome and INFERNO and many other Vulcan artists do not support or encourage you to support the #SAVETHEVULCAN fundraising and legal action. Please do not give them money as, in our opinion it is going to hasten a negative effective effect on the ability for the Vulcan to remain a longstanding artists enclave. Please also note that a portion of the people involved in SAVETHEVULCAN are newbies who moved in recently and have decided this is a good approach. INFERNO and other Vulcan artists believe that building a positive relationship with the owners that would work towards another solution, where artists could stay or possibly buy the Vulcan would be a more positive approach. At the very least create some form of incentive that would place the owners in a position to want to keep the Vulcan or work with the artists here to find a path of survivability in the bay area’s tough housing market. There is always a better solution instead of creating a contentious situation that disrupts this long standing artists community.

Rest assured the recent hub bub called #SAVETHEVULCAN does not affect INFERNO Gallery or the artists studios located at the Vulcan. The Vulcan Tenants Union has sounded a false alarm. There is a drive to push the building into a designation as a rent controlled building, however the Vulcan management has not threatened or made any moves to remove the residents. Additionally it is true the building was up for sale and if sold the future is uncertain. Who can predict the future? The issue of rent control is a big issue in the bay area and beyond.

INFERNO art gallery has shown artist from all walks of life. The majority of our solo shows have been by women artists, we have had shows on politics, religion to sex. Our most recent show included transgender and gay comic book artists. It included artists from across the country and people came from as far away as Monterey California to attend the show. Our goal has always been to show work that is out of the realm of commercial galleries. Keep in mind in our space alone we have six working Visual artists, a martial arts dojo, and an art gallery. We are also connected to the longstanding artists in the Vulcan going back to 1988.

This little slice of East Oakland has been the incubator for our cultural exchange. It saddens us that people move into the building (Many who are not artists) and then lay claim and want to change what so many artists have worked so hard to build. All the while they say they are “Helping the community.” Suffice to say you don’t help a community by using their artists and images of their business without their permission to push your agenda to sue a landlord. Additionally if you really want to help then think about looking for positive avenues that bring people together instead of dividing up the community and forcing artists to be involved in lawsuits.

The bay area unfortunately has gone through a large amount of changes and it has affected rents across the board. The area of East Oakland where the Vulcan Studios is located has been changing and with the influx of the Marijuana economy, people moving form SF and other consequences of the changing economy a lot of artists spaces are at risk of being of being sold and in some cases redeveloped. For now no one knows anything. Many residents are hoping that Madison Park holds on to the Vulcan and continues to support the artists living here. If not we hope for a landlord that appreciates the history, people and the cultural contribution the artists of this place has on the bay area. Sadly #SAVETHEVULCAN is not pushing a positive solution and they have created a lot of negativity in the Vulcan community. This flies in the face of a long history of artists respecting each others work and position.

INFERNO along with a majority of long term tenants have not spoken up about this – because quite frankly we just want to make art and pursue a live and let live attitude. However the Vulcan Tenants Union has forced us into this position by including against our will and messing with the landlord. Mind you other artists warehouses in the bay are have been shut down because of wingers moving into artists habitats and demanding things to be changed. Since the beginning there has always been give and take between landlord and artists but when you don’t the know the history you don’t know the full story. Nonetheless artists who make their sole living off of art like INFERNO have a lot to lose in this fight. Again we prefer to be left alone and go about our business but when someone comes in the room starts up a fan and then throw a pile of cow dung in to it everyone comes out smelling bad. So VTU is the fan and the cow dung is their lawsuit. So now all the residents here at the Vulcan are forced to deal with it.

Furthermore we were forced to speak up because images of the owner/director GP Barbosa Prince as well as images of the INFERNO have been used without our permission to raise up to 30K dollars. We asked to be removed and they purposefully and willfully determined that they had the right to use our images and video. Finally after a week they responded by removing it. Board members Eric James and Annmarie Bustamante(side note A. Bustamante has lived in the Vulcan for six months) piped in with absurd reasoning as to why #SAVETHEVULCAN had the right to use our name and image in their video that begs for dollars to pay lawyers on their behalf. The reality is they didn’t have our permission and any hokey pokey excuse they give is bogus and disrespectful of an artist’s right their art and image. Additionally this same group “The Vulcan Tenants Union” does not represent all the residents of the Vulcan.

INFERNO humbly asks you to NOT GIVE MONEY to this group or their bogus lawsuits.

We have been supporting Vulcan artists and the larger Oakland Arts community for 14 years and will continue to do so.